A symbolic trip for travelers in Sicily want to dream  the land of myth. The prestigious  museum is housed in Palazzolo Acreide, in a religious building of the 17  century, rebuilt in the 19 century as a private residence, called Palazzo Vaccaro since 1997 and owned by the town.

The property is characterized by the use of stone  carved in shelves  in the facade with anthropomorphic figures, both in real time on the ground floor. The research related to foreign travelers conducted by Mistress  Gringeri Pantano starts in the 80s by a series  of travels, exhibitions, business conferences, publications that  point out   documents and books, tracking through a philological work done  of writings and images  an impressive study related about  which missed or was missing.

Sicily for its centrality in the Mediterranean sea is the Island Journey. The Homeric mythical memories, Greek sublime classical places, the presence of interesting natural phenomena and “exotic” plants  have placed the great Mediterranean island, part of modern history,  centre  of cultural interests that peaked in second half of the eighteenth century.

In these years it will become  Grand Tour stage for   artists, architects, amateurs of antiquity, poets, diplomats, but also for the young aristocrats of Europe, accompanied by “travelling preceptor”, completed in Italy their cultural background. A lot of travelers  have  published accounts of their travels. These works, often accompanied by exciting engravings  about  monuments and places visited, are now an extraordinary documentation of the cultural and environmental heritage, but also the habits and customs of Sicily in the past centuries.

The Journey  in  Sicily  for travelers who  travelled through   difficult roads, was often a response to their aesthetic requirements. The works about  that experience  show “the need of the soul and the beauty” (James Hillman)  the culture of beauty, their Voyages, and their beautiful engravings .

The exhibition is located  in a museum space divided into three sections:

In the first there are the original  works of Jean-Claude Richard de Saint-Non and Jean Houel concerning  Siracusa, Ragusa and Hybleies. The second  you can find the maps and the Journey; in the third there are ancient books of Sicily and odeporici  texts. Thanks to the uniqueness  subject  Museum  expands in regional dialogue, through a video projected in the breakfast room, with all the places that  were essential destinations in Sicily Tour. In this sense, the museum space has a planning aimed to further developing and specific arrangements.

Alongside the etchings you can see Giuseppe Leone and Lamberto Rubino’ s photos. They suggest the current state of the places. Each image presents a comprehensive caption to benefit  educationally. The books present in the exhibition can be “browsed”  and consulted   by computer.

The logo of the museum, taken from an engraving by Jean Houel, is the Cybele Goddess, the Goddess traveler from Anatolia who crossed the Mediterranean sea  placing her  sanctuary in the rocky crags of the ancient Akrai.

A formidable initiative in  Palazzolo Acreide to know the history of our country. 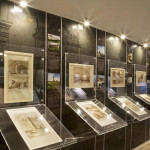 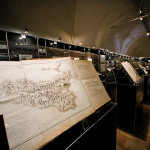 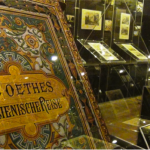 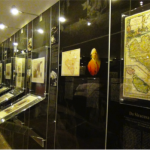